Country hottie Hunter Hayes just dropped a video for his song “Tattoo” and he is making all the ladies swoon.

“Tattoo” is the newest single off Hayes’ sophomore album Storyline, which landed in stores in May.  Check out the video and let us know your thoughts in the comments below.

1942 : Frank Sinatra ends his association with the Tommy Dorsey orchestra, recording the last two of over 90 songs before moving on to great acclaim as a solo star at Columbia.

1986 : RCA releases John Denver from his contract, possibly over his new single, “What Are We Making Weapons For?,” which he recorded with the Russian singer Alexandre Gradsky. RCA had recently been acquired by General Electric, which was a top military contractor.

2003 : Remember SARS? When the disease spread to Toronto, it scared a lot of people away. To get people back, the city put on a huge open-air concert featuring The Rolling Stones, The Guess Who, Rush, The Isley Brothers, The Flaming Lips and Justin Timberlake (who was jeered and had muffins thrown at him). About 450,000 people attend.

“Fences is a good friend,” Macklemore told Billboard. “He’s fu—-d up in the same way that I’m f——d up. Because of that, our lives relate beyond the music. I’ve always admired his talent for illustrating with words and evoking imagery.”

Listen and watch the video below

Musician Rob Scallon, who’s built a reputation for posting his crazy-creative covers online, may have outdone himself with this latest effort. It’s “Frantic Disembowelment” by Cannibal Corpse done on both ukulele and a solid-body U-bass, or the ukulele version of a bass guitar.

1965 : The Beatles’ second movie, Help!, premieres in London at the Pavilion Theatre, with none other than the Queen attending. (Though reviews are mixed, the movie is a financial success.) Later, manager Brian Epstein and the group attend a post-premiere reception at the Dorchester Hotel.

1968 : Refusing to play in front of the country’s segregated audiences, Gram Parsons leaves The Byrds on the eve of a South African tour.

1990 : Elton John checks into a hospital in Chicago, IL, for bulimia and substance abuse.

2011 : At a Dallas concert, Kings Of Leon frontman Caleb Followill leaves the stage after complaining about the heat. He never returns, and the band cancels the rest of their tour. The incident is officially blamed on “dehydration,” but Caleb’s brother (and bass player) Jared later Tweets: “There are problems in our band bigger than not drinking enough Gatorade.

According to Forbes, “Country musicians are America’s new rock stars—commercially, at the very least. Of the ten best-selling albums in the U.S. last year, three were country, and only one (Imagine Dragons’ Night Visions) could possibly be classified as rock.”

“Bang Bang” is the debut single from Jessie’s upcoming album. It will also be featured on the deluxe edition of Grande’s album, My Everything, out August 25. This single was leaked a day early and THANK YOU.  This new jam may be a little late to the party, but i think it is still in the running for song of the summer,  Enjoy

Hilary Duff‘s brand new single“Chasing the Sun” has arrived a bit early and you can listen to it in full right now!

1970 : Jimi Hendrix played his last concert in his hometown of Seattle, Washington. 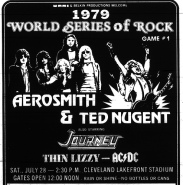 1979 : Ted Nugent, Journey, Aerosmith, and Thin Lizzy were among the headliners at the World Series of Rock concert in Cleveland, Ohio.

1987 : Surviving members of The Beatles took legal action to block Nike from using the song “Revolution” in a commercial.

2000 : A U.S. federal appeals court granted a last minute stay of an injunction that ordered Napster, Inc., to shut down. The order to stop operations came on July 26, 2000

“Those songs are collectively a love letter to NYC,” Valhouli said in an interview with CMJ earlier this month. “It’s fun to see how your block or neighborhood has been mythologized by, say, Leonard Cohen or Etta James or the Ramones.” He also made a Boston-based map and told Vanyaland he’s in the process of compiling one too for Los Angeles. Fans can send in song additions by emailing Valhouli at musicmapnyc [AT] gmail.com.