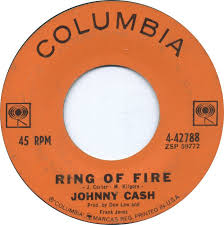 1958– Johnny Cash signed with Columbia Records, where he would remain for the next 30 years releasing over 60 albums.

1972– Paul McCartney and Wings played their very first show in the small French town of Chateauvillon. The band included Denny Laine, Denny Seiwell, Henry McCullough and Paul’s wife, Linda. It was McCartney’s first time on the road since the Beatles quit touring in 1966. The band traveled on a double Decker London bus with a psychedelic interior.

1995– The Grateful Dead gave their last concert with leader Jerry Garcia at Chicago’s Soldier Field. Jerry would die of a heart attack a month later while in drug rehab.

2013– Former Fugees singer Lauryn Hill began a three-month prison sentence in Connecticut for tax evasion. The 38-year-old was sentenced in May for failing to pay tax on $1.8m  of her earnings between 2005-07. After her release, Hill would be under parole supervision for a year, with the first three months to be spent confined to her home.