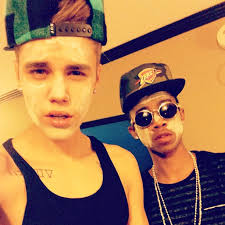 Justin Bieber probably wants to put 2014 behind him. Part of that fresh start comes in the form of new music. A new radio rip has appeared online of a new collaboration titled “Intertwine.”

What’s the use to being lonely ?
When I’m offering my company
You could be my lover, hold me
I’ll give you attention all night, all day
Intertwine, we can intertwine
We should make some sign
So I can intertwine, with you

The pair have worked together in the past with Lil’ Twist providing features on Bieber songs like “Twerk” and “Wind It.” They have become notorious friends in the past couple years, being prime targets of the paparazzi and occasionally getting into trouble.

This may be only the beginning for new music from Justin Bieber in 2015. He recently hinted across several social media platforms that there could be a new album in the works for 2015. It is all speculation at this point, but his manager Scooter Braun posted on Instagram saying 2015 is “Game Time.”

Listen to the “Intertwine” below.