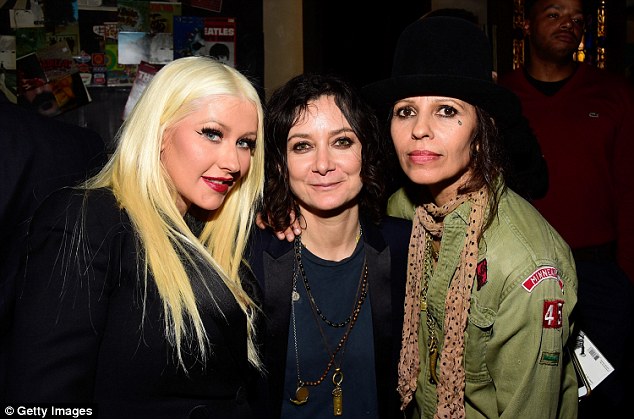 On Tuesday (Jan. 5), Hollywood big shots flocked to a star-studded party hosted by Linda Perry in honor of the film Freeheld. Perry wrote a song for the movie, called “Hands of Love,” and it is vying for an Oscar nomination in the best original song category.

Perry brought several performer friends to the stage including Ian Astbury of The Cult, who sang David Bowie’s “Moonlight Daydream” and The Doors’ “Break On Through” in quick succession; Juliette Lewis, who delivered a fierce cover of AC/DC’s “Dirty Deeds Done Dirt Cheap;” and Love wowed with a version of Radiohead’s “Creep.”

Listen to a few of the songs below

In the midst of one of the craziest award shows of the year, let’s remember the greats.

A true goddess walked among us that day, and still walks among us today. We were blessed with this snake performance, and the world WILL NEVER FORGET.

In a single moment, the entire world collectively sobbed at the glorious reunion of NSYNC. And JT was serving dance moves for days.

Anthems of the year and the century, TBH.

Beyoncé *literally* fights the police in this performance. She gave tooth and nail to serve you desperate housewife realness.

Classic Gaga at her best. The voice, the costumes, the blood dripping from her eyes. EVERYTHING.

This changed us all in a matter of minutes. Serving metallic pants, killer hair, and boy band outfits, Britney and the boys destroyed lives with this performance.

Admit it, you cried from enjoyment and sexual frustration. YAAAS, AUBREY.

The purple tips, the dance break, and Fred Durst? This is so ’00s it hurts. It hurts sooooo good.

END_OF_DOCUMENT_TOKEN_TO_BE_REPLACED

Award-winning duo A Great Big World return this week with a brand new single on Epic Records, “Hold Each Other.”

The duo of Ian Axel and Chad King made music history with their #1 global hit “Say Something” with Christina Aguilera. Their sophomore album is due out later this year and “Hold Each Other” is the first track we have heard.

Axel and King explain, “We are hoping that we can inspire people, even just a little, to fearlessly speak their truth when it comes to who they are and who they love.”

The first song from Xtina’s guest arc on Nashville was released on April 14 and the powerhouse singer absolutely kills it on the track. Give it a listen and let us know what you think!

Christina Aguilera, born in Staten Island, returned to New York to kick off the NBA All-Star Game. The Rockettes and Nas joined Aguilera on Sunday night (Feb. 15). She made her way through the NYC love songbook.

The teen pop star-turned-songstress-turned-sometimes Voice coach with the huge pipes turns 34 today, and to celebrate, we rounded up five of her underrated (read: non-single) gems from her career over seven studio albums.

Check them out below.

1. “I’m OK”
This Stripped deep cut is a soulful exploration about a young woman coming into her own and not putting up with bad influences in her life any longer. There are memorable career high points in singles “Fighter,” “Beautiful,” and “Can’t Hold Us Down,” but at her darkest — as she is in this tune about her childhood and abusive father — Aguilera’s powerful voice, here dialed back, shows just how emotionally powerful it can be.

2. “My Girls”
This Bionic track — featuring Peaches — got lost in the dirrty dance-pop era of Lady Gaga, Kesha and more. But its feminist message feels right at home in Beyonce & Nicki Minaj’s 2014.

3. “The Right Man”
Back to Basics was a great marriage of voice with material. While “Candyman” and “Hurt” became the singles on the back half of the album, this beautiful power ballad about feeling confident in her marriage was made for weddings. It’s also a nice compliment to some of her earlier work where she opened up about paint from her childhood, showcasing the future happiness she couldn’t see when she was younger.

4. “Mercy on Me”
This Back to Basics track finds Aguilera experimenting with gospel elements, which of course is a great fit for her large voice. When she lets loose with some of the biggest notes of the ballad, it shows you at her best the kind of chills she can produce.

5. “Sing for Me”
In some of Aguilera’s later work, her gorgeous voice is over-produced and she loses what makes her special. But on this Lotus track, Aguilera’s love for the music is front and center.

1973– Gladys Knight and The Pips – Midnight Train to Georgia

1985– Whitney Houston – Saving All My Love for You