Blake Shelton and Gwen Stefani performed a new song they wrote together called “Go Ahead and Break My Heart” on The Voice last night (May 9).

The chemistry between these two is undeniable.

The couple wrote the song soon after they had both gone through divorces. “Go Ahead and Break My Heart” will be on Shelton’s upcoming album If I’m Honest.

Shelton had previously stated that he was nervous to release this duet. “This is one of my favorite songs I’ve ever written or recorded,” Shelton said in a press release. “It came from a time and place when Gwen and I were beginning our journey together and both experiencing a hard time letting our guards down with each other. The song couldn’t possibly be more honest. I’m honored to have written and performed this song with the great Gwen Stefani. Respect.”

Justin Timberlake is back with “Can’t Stop the Feeling” from the new DreamWorks animated film “Trolls.”

The video for the new song features cameos from performers who lent their voice talent to the film .  Notables include Gwen Stefani, James Corden, Anna Kendrick, Junal Nayyar, Icona Pop, and Ron Funches

Watch the video. You wont be able to not dance along.

The song will be featured on Blake’s new album If I’m Honest, which is set to drop on May 20.

The pair will be performing the song TONIGHT on The Voice.

Click here to listen to “Go Ahead and Break My Heart” on iTunes!

[Verse 1: Blake Shelton]
I’m certainly sitting on your last good try
Here I am with half a goodbye
Wonder if you’re really gone this time
Just when I’m about to lose my mind
There you are getting on my phone
The moon is rising and you’re all alone
Maybe we could just hang a while
Maybe we can make each other smile
END_OF_DOCUMENT_TOKEN_TO_BE_REPLACED

Gwen Stefani has shared “Make Me Like You”, the latest track from her upcoming album This Is What the Truth Feels Like.

Gwen will be teaming up with Target for the first-ever music video created live on television. It will happen in a four-minute commercial break aired during the Grammys on Monday night (February 15).

Last week, Gwen Stefani released the music and video for “Used to Love You,” the first big single off her upcoming album. It was spare, vulnerable and raw not what we’ve come to expect from the No Doubt frontwoman.

Stefani appeared on “The Ellen DeGeneres Show” on Monday to perform “Used to Love You” live for the first time on TV.  Watch the emotional performance below. 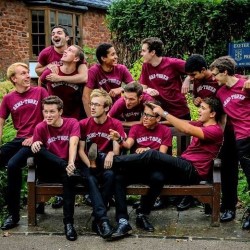 Exeter University’s Semi-Toned are the current champions of the Voice Festival UK . This is their unique mash-up of Gwen Stefani’s “Rich Girl” and “If I Were A Rich Man” from Fiddler on the Roof.

Last night, Gwen Stefani threw a pre-Grammy bash at Los Angeles’ Orpheum Theatre. She performed her first full solo concert in almost eight years. In addition to tracks from her solo LPs Love.Angel.Music.Baby and The Sweet Escape, Stefani sang her two new singles “Spark the Fire” and “Baby Don’t Lie,” her Calvin Harris collaboration “Together” and, for the first time, a new ballad called “Start a War,” co-written by Sia.

Tonight, Stefani will perform alongside her fellow The Voice mentor Adam Levine at the 57th annual Grammys.

Listen to her new track “Start a War” below

With a little help from The Roots, Gwen performed a few of her biggest solo track including her latest single with Pharrell “Spark The Fire” before going into “Rich Girl” and  “What You Waiting For?”  and “Sweet Escape.”

Thanks to a single, winking tweet from Adele, many fans expected the follow-up to her world-conquering sophomore album last year. However, 2014 came and went without so much as a song title and the project remains shrouded in mystery. In a recent interview, long-time collaborator Paul Epworth refused to comment on the sound or status of the album, saying only that it “will come when it’s ready.” Will she pull a Beyoncé? Collaborate with Pharrell? Make good on her promise to go country? Only time will tell because her people aren’t talking.

Appreciators of G.O.O.D. music are starved for new ‘Ye after a 2014 in which a much-anticipated follow-up to Yeezus was teased repeatedly but never produced. One track allegedly leaked, while another made a brief and tantalizing appearance in a World Cup Adidas commercial. On New Year’s Eve, Kanye threw fans for another loop by premiering the first official taste of his next project — an emotionally devastating ballad written from the perspective of his late mother and featuring Paul McCartney. Dubbed “Only One,” the piano-driven tearjerker is about as far from the queasy pyrotechnics of Yeezus as you can get. And with several more McCartney collaborations promised in a press release, the only thing we know is that everything we thought we knew about Yeezus II is wrong. New day, new ‘Ye.

It’s been two years since Rihanna’s last album and expectations are at an all-time high. Once known for releasing a new album every year, pop’s hardest working hit-maker decided to take some time off in 2013. While she continued to listen to demos and “phuck round” in the studio, it wasn’t until October 2014 that she really buckled down and got to work. According to insiders, her eighth album — dubbed #R8 by fans — will be a mix of ballads and edgier, Hudson Mohawke-esque bangers. She’s also reportedly recordeda song titled “Burritos,” so, yeah, it sounds like this album will be worth the wait.

What we know: 1) “i” and the untitled track he performed as the last musical guest ever on Colbert both slay. 2) His last album Good Kid M.A.A.D City was a rare kind of insta-classic revelation that floored just about everyone exposed to it. 3) Kendrick himself is a rare music artist, unafraid to take risks, confound fans, and say what’s on his mind in this era where nearly everyone is content to play it safe. All that adds up to next-level anticipation for whatever it is King Kendrick has planned, and we’re told from a label rep who has heard the album that our expectations aren’t misplaced. “I can’t tell you anything about the album,” he told us. “Except it’s going to blow you away.” Of course, label reps are paid to make hyperbole sound natural, but we are completely inclined to agree here.

If you don’t know the name Troye Sivan yet, you will soon. Thanks to a startlingly self-assured EP and an enormously dedicated fanbase, the Australian YouTuber-turned-singer is poised for IRL stardom. His five-song debut, TRXYE, cracked the top five of theBillboard 200 with almost no press and just three days of sales. More than just a stylish collection of synth-pop, TRXYE established Sivan as an artist with things to say and a voice worth listening to; mixed in with the songs about love and lust are critiques of prescription pill culture and thoughts on toxic masculinity. His forthcoming debut album for Capitol is to likely solidify his standing as one of pop’s most exciting newcomers.

END_OF_DOCUMENT_TOKEN_TO_BE_REPLACED

“It’s a clash of this punk/rock, kind of old-school feeling… like club feeling with this really modern emoji world. It just looks really cool together,” Gwen explained in an interview with ABC News. The 45-year-old also opened up about her comeback. “All of a sudden I’m doing this record, which I definitely did not plan. That’s probably what I love the most about it — not knowing and being free.”

Gwen Stefani and Pharrell performed their new single “Spark The Fire” on “The Voice” on Monday. Check out the video below!

“Spark The Fire”  is hardly the first time Stefani and Pharrell have collaborated together. Pharrell has influenced both Stefani’s solo singer and group career, with the relationship dating back more than 10 years. Pharrell co-wrote the hit “Hella Good” with No Doubt, and worked with Stefani on chart-toppers like “Hollaback Girl.”

After the performance, Stefani officially debuted the “Spark The Fire” music video. Check out both clips below.