Fall Out Boy and Panic! At The Disco go way back. Back in 2005, Pete Wentz discovered Panic! and introduced them to the world, beginning a long and sometimes drunken friendship. While on the Save Rock and Roll Tour, Panic! frontman Brendon Urie recounted the history of Fall Out Boy in the style of Comedy Central’s inebriated education series, Drunk History.

Check out Urie’s version of the Fall Out Boy story, following shots of Coldcock whiskey, shots of Jameson, shots of Glenlivet scotch, beers throughout the day, beers chugged before the shots, and a vodka Red Bull from Fall Out Boy guitarist Joe Trohman:

Not bad, Brendon. The energetic frontman holds his liquor with the best of ’em, even if he couldn’t remember more than three tracks on Save Rock and Roll and messed up the name of FOB’s oft-forgotten debut album Evening Out with Your Girlfriend.

The story begins with Trohman meeting vocalist-guitarist Patrick Stump in 2001 and ends with Fall Out Boy’s 2013 album, Save Rock and Roll. And since the filming of this clip, the band of course announced its new album American Beauty/American Psycho, which drops Jan. 20.

Can’t believe that it has been 16 years since Brit Brit released her classic hit “Baby One More Time.” This song launched her career into the stratosphere.  Although no one can beat the Britster, here are some artists who tried.  Some of these covers are insanely great.  Watch below.

The cast of Glee

Panic! At the Disco/Dresden Dolls

The cast of Spring Breakers (So, Selena Gomez again) 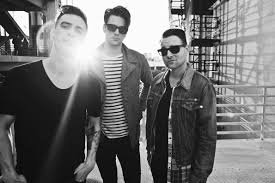 Panic! At The Disco has actually been covering the song for ages, but now, they’ve released an amazing live video of their concert performance. The band currently features Spencer Smith, Brendon Urie, and Dallon Weekes.

“We covered “Bohemian Rhapsody” by @QueenWillRock every night on #TheGospelTour and it was awesome and here’s a video,” the band shared on Twitter.

Simple enough! Check it out below: