DJ Earworm talks about creating “Do What You Wanna Do,” his latest year-end mash-up, with a lack of smash dance hits

Every year since 2007, DJ Earworm has taken the calendar year’s 25 biggest pop songs and combined them into an incredibly popular, joyfully constructed mash-up, perennially dubbed the “United State of Pop.” Earworm has been analyzing the Billboard charts since he was a kid, and for “Do What You Wanna Do,” the 2014 edition of Earworm’s single-length mega-mix, Billboard.com serves as his launching pad. Watch to the exclusive premiere of the latest “United State of Pop” below:

“Personally, I’ve been obsessed with the Billboard charts since I was 11 or 12,” Earworm (real name: Jordan Roseman) tells Billboard about the tradition he started in 2007. “When I was a little boy, I used to tune in to Top 40 shows on the weekends, and I’ve always been fascinated by what makes popular tastes tick … It’s great to be able to come full-circle with Billboard.”

Over the past seven years, the California producer’s “United State of Pop” series has packaged the sounds of some of the world’s most colorful pop personalities — think Rihanna, Kesha, the Black Eyed Peas and many more — into kinetic dance singles that each earn millions of hits online; his breakout mash-up came in 2009, and that year’s video currently has 44 million YouTube views. Although Earworm’s creations typically operate at high BPMs, the DJ tells Billboard that he has to respect the ebb and flow of popular music, which is why his 2014 mash-up is a bit more contemplative.

“The thing that has been most notable in the past two or three years is the decline of EDM,” says Earworm of the 25 songs he selected for this year’s song. “The ‘United State of Pop’ became this dance track from ’09 to ’12, and then starting last year, there just wasn’t enough in that genre to fully support it, so I went down-tempo. And this year, ‘Timber,’ which was popular in January, is the only popular dance track I’m dealing with. It’s definitely down-tempo, so you have to decide, how is this going to go? How am I going to maintain the energy levels while being true to the sound of the year?”

Earworm continues that 2014 was “dominated by these slow, ponderous songs like ‘Say Something’ and ‘All Of Me,’ and then swaggering hip-hop songs like ‘Turn Down For What,’ ‘Talk Dirty,’ and ‘Black Widow.’ Then you have totally uptempo songs like ‘Happy’ and ‘Shake It Off,’ too. It’s a little bit more diverse, and definitely softer than it’s been.”

Fashioning a pop song out of R&B ballads like John Legend’s “All Of Me” and offbeat pop-rock tracks like Bastille’s “Pompeii” is no easy task, and Earworm says that crafting the 2014 “United State of Pop” was a more challenging process than usual. He relied on the drums from Jessie J’s “Bang Bang,” the percussion of DJ Snake & Lil Jon’s “Turn Down For What,” the horns from Jason Derulo’s “Talk Dirty” and the piano hooks from A Great Big World’s “Say Something” to help create an instrumental bed that was “much more complex” than in previous years.

“I would love the whole thing to be perfectly blended each time, but it also has to be digestible,” Earworm explains. “Some years, it’s a pretty straightforward instrumental from one source, but this year is the most blended instrumental I’ve been able to achieve yet.”

Earworm says that he used to stay glued to the Internet when the “United State of Pop” would debut online each year, but in 2014, he’ll be too preoccupied to monitor the online feedback. “As soon as this [launch] is over, I’m going to New York, and I’ll be working on some original material which I’m super excited about,” says the mash-up maestro.

Before Tuesday night, mass musician sing-a-longs were few and far between. Thankfully, BBC Music pulled out all the stops with their star-studded cover of the Beach Boys 1996 hit, “God Only Knows”. In light of the BBC Music launch, the network got everyone (and by everyone, I mean 29 world class musicians) to participate in the promo. With the likes of Elton John, Florence Welch, Pharrell, Lorde, Chris Martin, Dave Grohl and Sam Smith, it certainly didn’t disappoint.

Much like its all-star predecessors, “God Only Knows” will contribute to a good cause. The song is set to be released as a single in order to raise money for the BBC’s Children in Need appeal. I have to say, I haven’t been one to seek out celebrity sing-a-longs, but there is something powerful about world class artists collaborating on a single project. I think we ought take a trip down memory lane and give a nod to all those great musical collabs from the past. There are more than you probably know:

“We Are The World” is the mother of all mass musician sing-a-longs. Written by Michael Jackson and Lionel Richie, “We Are The World” was released in an effort to raise awareness and bring relief to the famine in Africa between 1983-1985. The song raised over $10 million in record sales from the United States alone. The song included performances from over 44 world class musicians—including Cyndi Lauper, Billy Joel, Bruce Springsteen and Ray Charles—who operated under the name of USA for Africa. Fun fact: When the musicians entered the studio, they were met with a sign that read: “Check your egos at the door.” END_OF_DOCUMENT_TOKEN_TO_BE_REPLACED

According to Billboard, Gwen Stefani is currently finishing up her new solo album with Pharrell!

Hold on a sec…

Ok, I’m back. It’s been eight years since The Sweet Escape, but the wait may soon be over.  Stefani’s manager Irving Azoff revealed that the singer is currently in Miami, recording new tracks with frequent collaborator (and Voice co-star) Pharrell Williams. She plans to perform the lead single on The Voice later in the season.

See my current mood after the break END_OF_DOCUMENT_TOKEN_TO_BE_REPLACED

Check out Usher flashing a smile under the red lights in the brand new music for his song “She Came To Give It To You,” off his upcoming album UR!

The 35-year-old singer is joined in the video by Nicki Minaj and Pharrell Williams, who produced the song.

Usher‘s upcoming album UR is set to drop sometime this fall. We can’t wait! 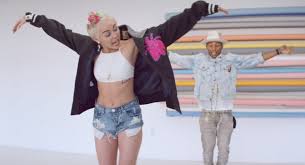 Cyrus shows up about halfway through the video wearing a very miley outfit, but, shockingly, she doesn’t twerk—but she does stick out her tongue, pose for the camera, and perform some goofy moves with Pharrell.